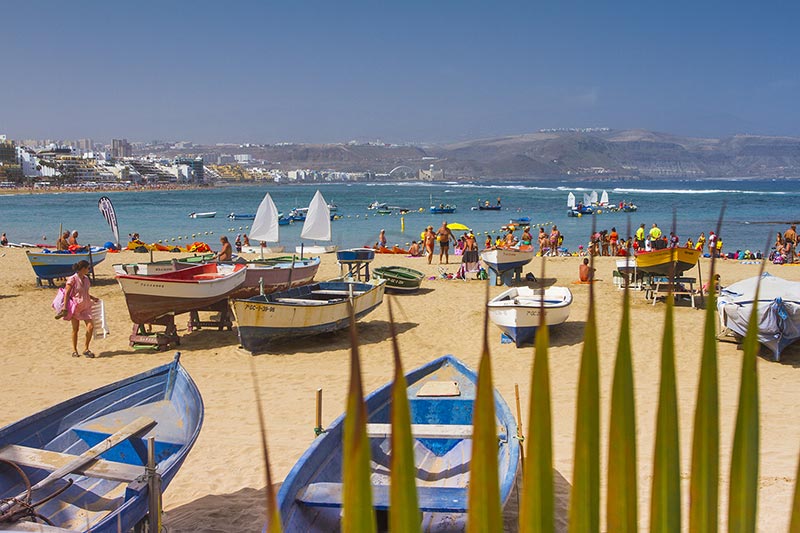 Las Palmas is the city with the most pleasant climate in the world. But, when you look at a Gran Canaria weather forecast, you often see the north coast and Las Palmas under cloud even when the rest of the island is sunny.

So what’s going on?

There’s no doubt that Las Palmas is cloudier than the resorts in south Gran Canaria and even Agaete in the north-west corner of the island.

It’s because the Trade Winds blow from the north and pile up cloud against the steep northeast coast. The result is that Las Palmas gets more cloudy days than the rest of the island but is also sheltered from extreme temperatures.

It can be 43ºC in south Gran Canaria during a calima and not make 30ºC in Las Palmas. In winter, when the cloud-free southern skies leak heat, it drops to 14ºC at night while it’s rarely below 18ºC in the capital.

Another benefit is that the Trades blow away traffic fumes and make Las Palmas the city with the cleanest air in Spain.

What is a pleasant climate anyway?

The Syracuse University study that declared Las Palmas’ climate the world’s most pleasant didn’t just factor in hours of sunshine per day. It looked at a wide range of things like average temperature, lack of extreme weather events, and rainfall.

Overall, it found that Las Palmas’ climate was ideal for its residents. it’s one thing to holiday in

Everyone loves a blue sky, but it’s one thing to holiday in perpetual sunshine, quite another to live and work in it.

If you’re planning a holiday in Gran Canaria and just want to bake on the beach, maybe you’re best off going south. Don’t get me wrong, you’ll get sunshine in Las Palmas, but you will also see clouds most days.

However, if you like a bit of history, culture and cuisine to go with your suntan, then Las Palmas’ mild weather has its benefits. For example, it’s a lot easier to tour the art galleries and museums at 25ºC than it is at a baking 35ºC. And if you live and work in Las Palmas, cool days are a blessing.

And, of course, if you want sunshine, you just hop in the car or get a bus to the resorts or to Agaete and you’ll be under the blue dome within 30 minutes.

Live or stay in Las Palmas’ pleasant climate and pop south for a blast of sunshine whenever you want. It what’s we do and it’s the best of both worlds.