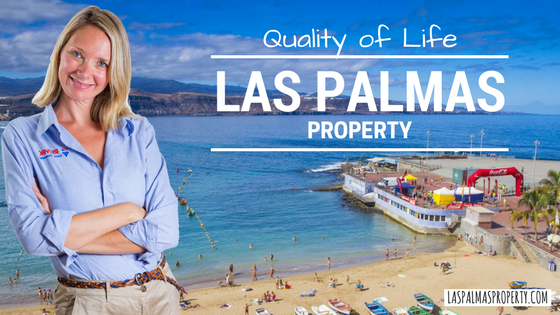 Las Palmas has one of the highest Quality of Life scores of any city in the world, according to website Numbeo.com

Numbeo uses a wide range of factors to calculate its quality of life index, including…

Overall, Las Palmas scores a Very High 187.45, putting it in the top 5% of cities around the world. It scores particularly high on factors such as low commute time, healthcare, low pollution, safety and, of course, climate.

Given that Las Palmas has the cleanest air of any city in Spain, the most pleasant urban climate in the world, and one of the world’s best city beaches, the high Quality of Life score isn’t surprising.

However, the fact that it ranks so close to the top of the list worldwide is still exciting news.

Las Palmas’ score compares favourably to other cities in the Canary Islands and Spain (165.67) on average.

In fact, the only major European cities with a higher Quality of Life score than Las Palmas de Gran Canaria is Eindhoven in the Netherlands. Edinburgh comes just behind Las Palmas with a score of 186.02.

Other cities around the world that outpoint Las Palmas are already famous as great places to live: Wellington in New Zealand and Canberra in Australia.

If you want to live in a city rated as one of the best places to be in the world, you know who to call.