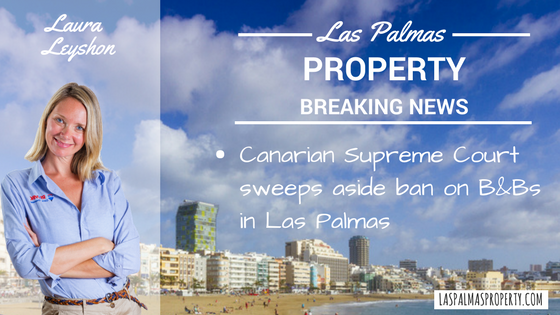 A Canarian Supreme Court ruling issued today (26/04/2017) has removed the restriction on renting a room in your property to tourists and opens the door to bed and breakfast-style rentals in Las Palmas.

The 2015 Tourist Rental Law banned property owners from renting a room in their property on a short-term basis to tourists. It stated that owners could only rent their entire property to tourists.

The TSJC stated in its ruling that the ban on room rental and B&Bs was anticompetitive and therefore illegal.

In the Court’s own words…

“There is no reason to require a client who only wants to hire a room to stay, to assume the cost of renting the entire home if the owner wants to offer that service“.

This ruling had been coming as the Canarian Competition Authority has already stated that the ban on room rental was anticompetitive and illegal.

How is tourist rental affected by the ruling?

The Court also seems to shredded large parts of the rules including clauses stating that owners had to have a license before starting to rent their property on a short-term basis.

The TSJC stated in its ruling that the government can’t insist that owners have a license before starting to rent because they are allowed to start an economic activity after making a responsible declaration that they conform to the rules.

The TSJC also seems to have swept aside many of the clauses in the law that banned property owners in tourist resorts from renting on a short-term basis. However, the implications of the judgement in resort areas are not yet clear.

In any case, this part of the judgement doesn’t affect Las Palmas as the whole city is residential and short-term rentals are allowed everywhere in the city.

This ruling is by the highest court in the Canary Islands but the Canarian Government could still appeal before the Spanish Supreme Court.

There are also several other rulings due from the Supreme Court over the next few weeks so this isn’t the final word. These rulings are expected to reinforce today’s judgement.

While we still don’t know how the ruling will be interpreted by city authorities, it’s looking good for potential B&B owners and people looking to rent out a room in their home to tourists in Las Palmas de Gran Canaria city.

I’ll update as soon as there is anything new.